Take a peek into the new Bellwether Beach Resort on St. Pete Beach 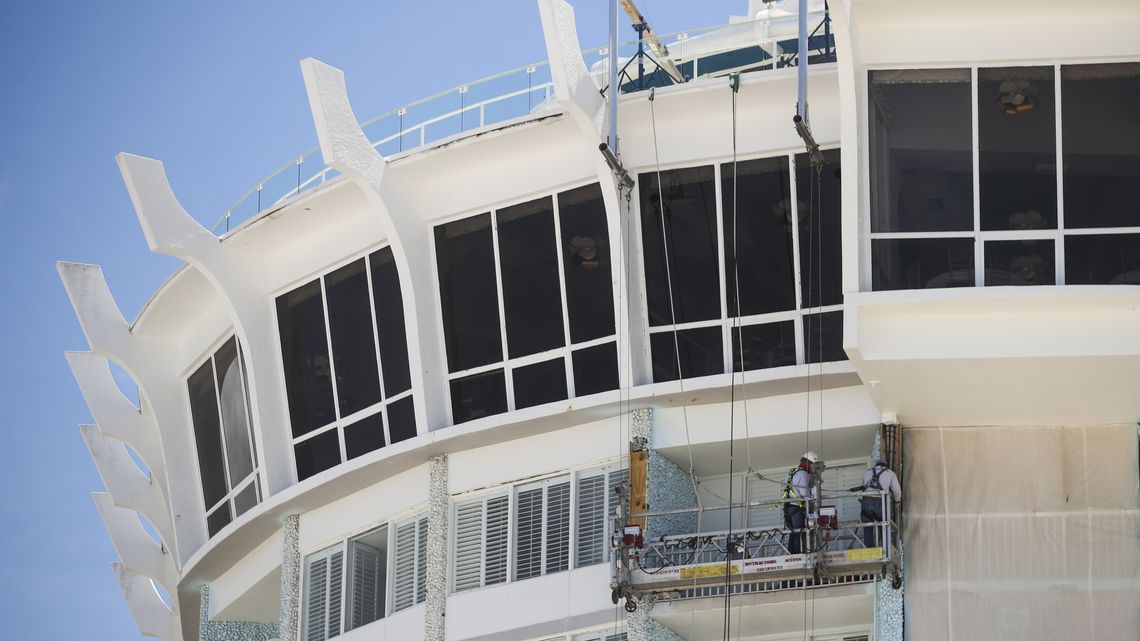 The cylinder-shaped hotel on St. Pete Beach just got a major makeover.

Formerly known as the Grand Plaza Hotel, the Bellwether Beach Resort reopens in August with a new retro-modern aesthetic — a sharp shift from the neutral decor of its 50-year past.

“We have preserved its nostalgic roots, but it’s essentially a new hotel,” said Jessica Milton, the regional director of public relations.

Miami investment company Gencom bought the building in 2018, with the intention of scrapping the 1970s design for a contemporary, beach chic look. It closed for renovations last November.

The result? A sprawling lobby with views of the Gulf of Mexico. Multiple revamped event venues. And 156 colorful rooms.

Less than a mile away, the Beachcomber, under the same ownership group as the Bellwether, has began ditching its monochromatic vibe and adding an indoor event space. Together, the renovations are expected to cost about $30 million.

The Postcard Inn on the Beach was a former Travelodge built in the 1950s before the Starwood Capital group reinvented it in 2009. Five years later, it got a second overhaul with a $6 million price tag. And a two-story pool bar and rooftop lookout were added to the landmark Don CeSar Hotel last year.

Today, the Bellwether entryway boasts pale yellow and orange sofas with leaf-like patterns and a hanging teardrop chair. Vintage artwork from the ‘60s — of birds, synchronized swimmers, Volkswagen vans — is scattered on the walls. Guests can see the pool, and the ocean beyond, from the doorway.

“Bellweather did away with outdated structures, expanded the space and brought in color,” Milton said.

Its guest rooms have been retrofitted with lime green and tangerine orange themes, which alternate by floor. Striped rugs, funky mirrors and lamps painted with geometric patterns fill empty corners. The 16 suites include two balconies, each furnished with blue chairs.

Every room offers at least one king bed.

On the tenth floor, the six penthouses feature forest green couches positioned next to floor-to-ceiling windows. Beyond them, visitors can see the Sunshine Skyway or downtown St. Petersburg. Square stools and golden bar carts spruce up the living space. A black-and-white mosaic tile pairs with the framed classic swimsuit in the bathroom.

Longtime staple Spinners Rooftop Grille still provides rotating views of the Gulf on the 12th floor. It circles, almost unnoticeably, for diners once an hour.

But novel seating arrangements and ambient lighting “have elevated the atmosphere,” said Jay Rocha, the vice president of operations.

Its menu increasingly focuses on locally-sourced, sustainable ingredients from seven vendors. That means the greens are from The Villages Grown, a farm two hours north. Seafood for the ceviche, clams and grouper dishes is caught by local anglers with Local Turtle Foods.

Level 11 Bar & Lounge is situated on the left half of the floor below. There, people can indulge in drinks and appetizers. The right half is instead a continuation of Spinners with umbrella-covered tables.

A chef’s table, fired up every night for dinner, separates the two halves. Courses are prepared on-site for up to 14 diners, as they face the Gulf.

Outmoded event spaces have been refashioned, too,complete with new names.

The Gulf Vista Ballroom and Ocean’s Edge room — which can accommodate 75 and 150 guests, respectively — got a fresh layer of light blue paint. The renovation also expanded the hotel by an event room and two outdoor patios — one named the Hideaway — near the front entrance.

Those spots can cater to the 400 or so weddings and wedding-related events Bellwether plans to host annually.

“These plans were made years ago,” Rocha said. “This is that vision coming to life.”